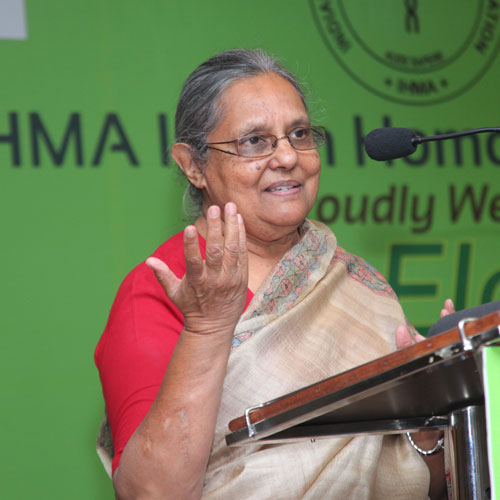 Ela Gandhi, 74, the granddaughter of Mahatma Gandhi, based in Durban, South Africa, is a renowned peace activist and the recipient of numerous awards for her work in promoting non-violent political change. She was born in Durban in 1940, the youngest daughter of Manilal and Sushila Gandhi.

In 1947, as Mahatma Gandhi’s nearest relative she raised the Indian flag in the village where her maternal grandmother lived. At the age of 12, she joined the liberation movement in South Africa. She worked with the poor as a social worker in the Black townships and Indian communities.

In 1971, Ela Gandhi helped revive the Natal Indian Congress, founded by her grandfather in 1894. In 1973, She was under house arrest for 9 years and banned from political activism by the South African government. Undeterred, she continued her work underground. She was actively involved in the United Democratic Front(UDC), one of the most important anti-apartheid organisations of the 1980s. One of her sons was killed during the struggle against apartheid.

Ela Gandhi as a UDF member met Nelson Mandela prior to his release from prison in 1990. From 1994 to 2003 Gandhi served as a member of the Parliament of South Africa, where she aligned with the African National Congress party.

After serving in parliament, Ela Gandhi developed a 24-hour program against domestic violence and founded the Gandhi Development Trust. She received the Community of Christ International Peace Award in 2002. In 2007 she was conferred the Padma Bhushan, one of India’s highest civilian awards.

In April 2012 Gandhi presented a plenary session on peace education at Blurring Boundaries, an international educational development conference hosted by Georgia State University and co-sponsored by the United Nations Academic Impact and the Committee for Teaching about the United Nations. Gandhi visited Australia for the first time in February 2013, to speak and set up an independent Australian branch of the South Africa-based International Centre of Nonviolence, of which she is vice-chairperson. She is also currently the honorary President of the World Council of Religions for Peace.

She is a staunch promoter of Homeopathy & other Complementary, Alternative & Traditional Medicine streams. She had fond memories of Homeopathy during her days as a child with Mahatma Gandhi. She had close proximity with Dr Richard Steele, a Homeopath & Educator at Durban, who was highly influenced by Mahatma Gandhi, was with her in the mid-’80s as a care-taker at Phoenix Settlement until a year before it was destroyed & later as the Secretary of Phoenix Settlement Trust.

She is the former Chancellor of Durban University of Technology (DUT) which delivers BTech Homeopathy & MTech Homeopathy for near two decades. At present, she is engaged in processes for achieving a Chair for Homeopathy at DUT. She also supports the development of Homeopathy and is associated with Homeopathic Association of South Africa [HAS] where she gave a keynote address at their recent national congress at Durban in 2014.

She is also a Patron of Global Homeopathy Foundation (GHF), a non-profit international NGO, founded by a group of Homeopathic activists who desire that Homeopathy reaches the masses across the world.

She also participated in an event held to honour her on 5th February 2015 by the Homeopathic fraternity of India led by Global Homeopathy Foundation [GHF] & hosted conjointly with CCRH [Central Council of Research in Homeopathy], at CCRH Headquarters, New Delhi.

To Express Your Interest